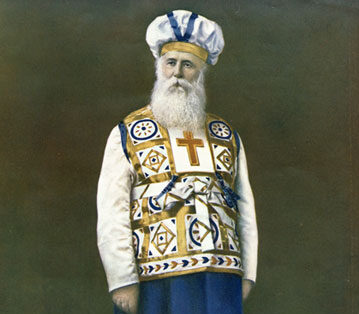 John Alexander Dowie (born 1847) founded the Christian Catholic Church in 1896. It has no connection to the Roman Catholic Church. Originally from Scotland, Dowie preached in Australia and then shifted to the United States after he was suspected of arson in an insurance fraud case. Around 1900 with about five thousand followers, he designed and built the city of Zion, Illinois which was initially ruled by Dowie in a theocratic government (though God had nothing to do with this). Claiming to be a faith healer, he would not allow doctors into Zion. Several died who trusted him, including his daughter. Because he was a cult leader, he would not allow religious freedom. His was the only church in town and he was recipient of all tithes. Millions of dollars were his to fritter lavishly.

Dowie led his cult with some rather impressive titles declaring himself the forerunner of Christ. He said he was Elijah preparing the earth for Christ’s return and announced himself as “first apostle.” In 1903 he went to convert New York City (no small task) and was also planning some sort of paradise with a working farm in Mexico. He was another busy con artist in a robe planning his next move or escape. Dowie left trails of suspicion. Having been arrested numerous times he left a trail of police records as well. Because of uncontrolled spending and growing evidence of mistresses in every corner, he was ousted in 1906 and his second in command took over.

On the other side of the world was another religious leader named Mirzā Ghulām Ahmad. He was born 1839 in India and possibly had more troubles than Dowie. Ahmad was an Indian Muslim who formed his own cult with a teaching counter to Islamic tenets. He declared himself be the fulfillment of prophecies. According to Ahmad he was a prophet of Islam, and the Christ (among other things). Ahmad had thousands of followers at one point. He also had several Muslim scholars calling for his death. One of Ahmad’s more aggressive tactics against his religious enemies was to offer unusual challenges.

Somehow these two men begin to correspond. Dowie (in North America) and Ahmad (in India) begin to write each other. One is the self-proclaimed Elijah, the forerunner of Christ’s return. The other is the self-proclaimed Christ who has returned. As one might expect, they doubted the other’s authenticity. Both are correct assessing the other, thus both are lying about themselves.

In 1903 came the challenge from Ahmad, a test of who is right. The contest is this: each man is to pray that God kill the other. “If one of us is fabricating a lie, he [the liar] should die before the other.” The one who dies first must have been the fraud. This might be a brazen show of confidence from Ahmad except this is the sort of game he plays. It is possible Ahmad did not care who died since the odds were against him. Dowie was younger by eight years, a millionaire, had guards protecting him, and was not threatened by Muslim scholars. Both would eventually die but it is unlikely death would take them at the same time. Ahmad had to know his contest could take years to play out. If Ahmad died first, he would not be around for the gloating. If Dowie died first, all the better. Of course, in 1903 either could claim themselves winner and lie that the other man suddenly died by plague and fire. Their believers would be hard pressed to prove otherwise.

It is easy to laugh at the audacity and folly. This is a battle of the false prophets. It is a struggle to the death between praying pretenders. Liar is pitted against liar. They are doing it to themselves. Regardless of who died first, neither could hope to win anything as both were godless. If Ahmad was the Christ returning to the earth he could not die. Christ will not come back to die of natural causes. When Christ returns, He returns for judgment. Elijah will not herald the return of Christ. Christ will come as a thief in the night.

In 1 Kings chapter 18 the actual prophet Elijah had a contest with the prophets of Baal but it was resolved in a day. God’s actions on Mount Carmel were immediate, unmistakable, and conclusive. There was a question to be answered. Is Jehovah God, or is it Baal? It did not turn out well for the 450 prophets of Baal. In Numbers 16 a man named Korah challenged Moses’ authority as the leader of Israel. That did not turn out well for Korah and those with him. In both cases it would have been best for the prophets of Baal and Korah to back away and to fear God and His demonstrations. God always wins.

What about these two false prophets pretending to speak for God? They are both ungodly and powerless. Both Dowie and Ahmad lived on deception and bluster, but, as it turned out, neither one lived beyond five years after the challenge. Dowie died March 1907. Ahmad died fourteen months later in May 1908. Was anything proven by these two? Yes, but not what either would want to prove.

Proverbs 14:8  The wisdom of the prudent is to understand his way, But the folly of fools is deceit.