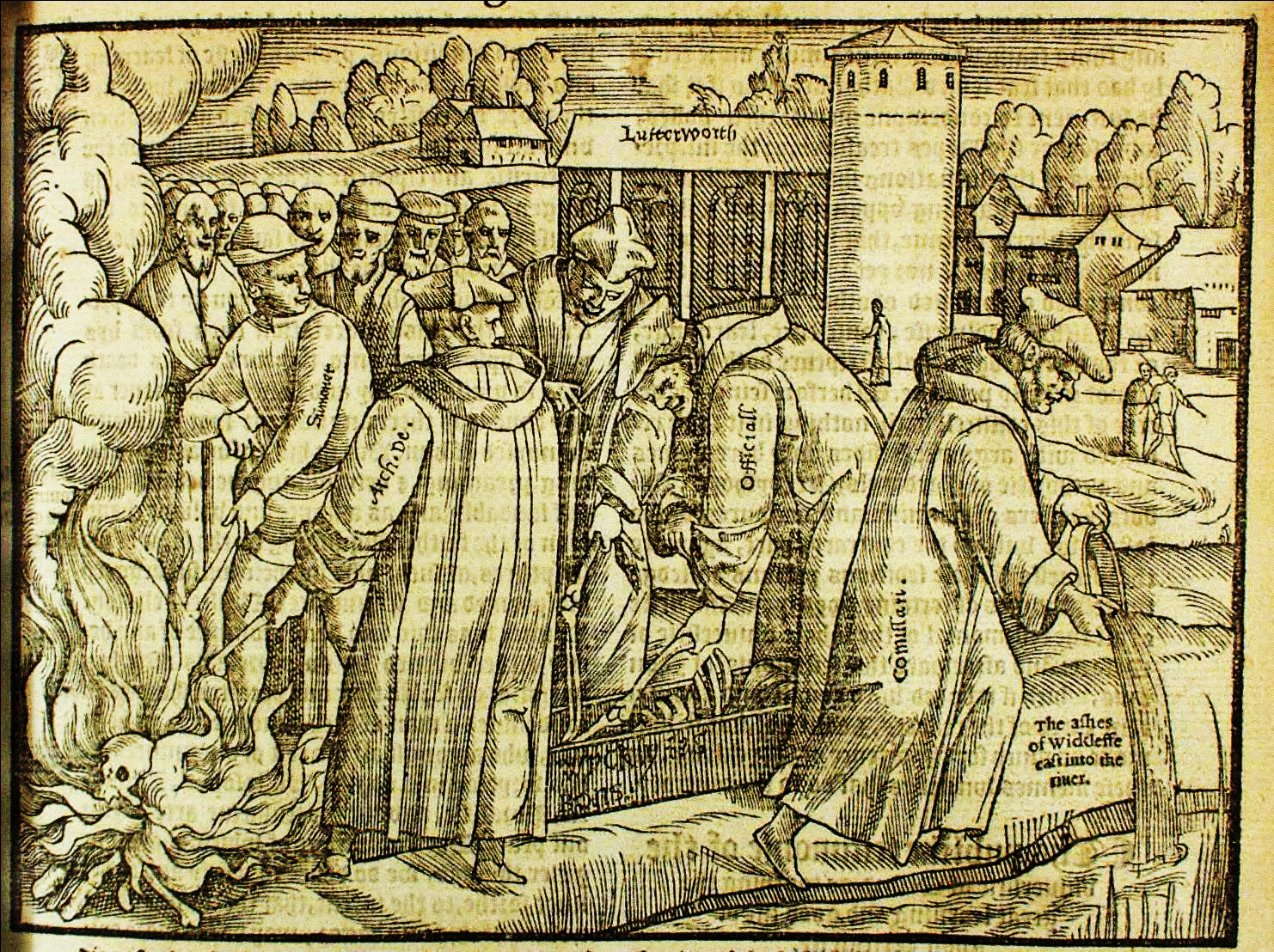 Matthew 10:28 And do not fear those who kill the body but cannot kill the soul. But rather fear Him who is able to destroy both soul and body in hell.

John Wycliffe was born around 1324 and died December 31, 1384. He was a religious reformer living in England and is considered one of the first voices of the Reformation which would begin to take shape a hundred years or more after his death. He firmly believed the Bible needed to be translated into the language of the common folk. He was English, was educated in Oxford and understood the average person in England could not read the original languages of the Bible nor could they understand Latin used by the clergy in worship. He saw Latin as locking everyone to the clergy who then became the exclusive religious filters. All doctrine came from them and few others could read what the Bible actually taught. Wycliffe was against many things in the Catholic church: the papacy, praying to saints, transubstantiation, indulgences, monastic orders, etc. Wycliffe understood Catholicism is not from Christ. How did he know this? He could read the New Testament while so many others could not. The New Testament church is nothing like Roman Catholicism. He knew it did not match up with the teaching of Christ. This is obvious if you have access to scripture which describes a church very different from what Wycliffe saw.

This brought powerful enemies at home and the papacy. These enemies recognized a great threat, and he could not be bribed. Thus, they considered Wycliffe a heretic. He was part of a group whose mission was to translate the Bible into English which was against the law. In fact, it was this work that helped in the making of the Authorized King James Bible in 1611 (227 years after Wycliffe’s death). These enemies also considered his teaching dangerous because he believed the church did not have authority over the state nor base its legitimacy from scripture. It had no authority whatsoever.

One big enemy to Wycliffe was Pope Gregory XI who sent out proclamations in 1377 which condemned Wycliffe’s heresy. Some protected Wycliffe, but they could only go so far to defend him from the anger of the pope. That anger was to be properly vented in England by Archbishop Sudbury. Wycliffe stood before Sudbury in trial, but the trial turned into a riot. Wycliffe and those with him managed to escape. In 1378 he was placed on trial again but King Edward III’s widow pleaded for him. Wycliffe was released with a strict warning he ignored.

Wycliffe eventually retired to the town of Lutterworth and in 1384 he died from a stroke. He died but his enemies were just beginning. In 1401 it became illegal to read the Bible in English publicly or privately. Anyone convicted of this crime would be burned at the stake. In 1415 his enemies had enough. The influence of Wycliffe continued, and he was put on trial once again. Yes, Wycliffe was dead, but still he must be made an example of.

It could truly be said that “Joe Turner’s been in here and gone” (that’s from an old song). What I mean is: it’s a bit late to start lashing out at Wycliffe. By 1415 he had been in the grave forty-four years. What can you do to him? How can you possibly punish him in any meaningful way? And to what end? It could not be to reform him or bring him to tears and a better self. But they felt compelled to do something, so his bones were dug up and burned. His ashes were then scattered. They could do nothing else. This was ordered by Pope Martin V who was age fifty-nine at the time but was fifteen years old when Wycliffe died.

Men did what they could which was only a gesture of how much hatred they fostered and how corrupt their hearts were. Wycliffe wanted the common man to read the Bible. Catholicism never belonged to Christ and a quick read of the New Testament would reveal the truth. An accessible Bible naturally meant loss of power and wealth to the Catholic Church. Wycliffe’s influence was problematic even though he was dead. Something had to be done. But a man dead by one minute or forty-four years does not matter. Once dead there is nothing else men can do to him good or evil. The limit has been reached. Did this act bring the fear of the papacy to one and all? It did nothing to stall the Protestant Reformation. It was a silly act from silly people.

There is a point where we are truly untouchable by anyone here. Men may kill us, but they can do nothing else once that happens. The burning of Wycliffe’s bones makes the point well. It could not hurt him in the least but demonstrated the frustration of the man who ordered it. When Jesus died on the cross there was nothing more the Romans or Jews could do to Him. Jesus describes this as “going away.” Once that happened, they could never touch Him again. It would be over, and Jesus would be glorified. For a faithful follower of Christ death only leads to Him. It is the escape from persecution. Persecution is closed forever. At death we rise from the reach of men and into the eternal protection of God. We travel from men’s hands to God’s hands. For the enemies of Christ, however, landing in God’s hands will be a frightening thing.

John 8:21 Then Jesus said to them again, “I am going away, and you will seek Me, and will die in your sin. Where Igo you cannot come.”