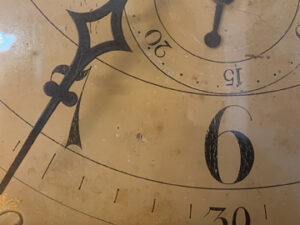 We are all under time and traveling in one invariable direction toward the future. This is a trip consistent and precise. There is no speeding nor pausing nor turning backward. We are perpetually on a pace of sixty seconds a minute, sixty minutes an hour, twenty-four hours a day which make up weeks, months, years and centuries. We are ever moving forward. Even if we changed the way we measured time we are still moving through it. If we rid ourselves of clocks and calendars, we would still be well aware of its existence by its passing. This is not solely observed by growing older or things turning to dust. Those take a greater amount of time to notice. There are millions of things happening in short order. The word here is “order.” One action is simply followed by another in the order when each occurred. All happens in time. Let us look at a simple sentence: Stanley got up, ate lunch, put on a jacket and walked to 68th street for his piano lesson.

That sentence implies the passing of time by the series of actions. It is understood that Stanley did not do everything simultaneously or that time was not involved. Stanley got up before he did anything else in the sentence and each action happened through time. As time passed this is what Stanley did in turn. So, we look to ourselves. We exist in time and are subject to it. Everything we do is done at a point in time and all language expresses it. Verb tenses represent past, present and future. The language of the Bible communicates time quite well with verbs of all sorts even though God is not subject to time as we are. Does time exist? Of course, it does. Does time exist with God? That is like asking the question: Does the earth exists with God? Not only does it exist with God it exists because of Him. He created them. Let us take a look at time and God.

Psalm 90:2 Before the mountains were brought forth, Or ever You had formed the earth and the world, Even from everlasting to everlasting, You are God.

Hebrews 13:8 Jesus Christ is the same yesterday, today, and forever.

God is eternal. He has no beginning nor end. We can easily understand those words but to think about the meaning of them can soon become incomprehensible. God has always been. How is that possible? Everyone and everything I have seen has a beginning. Everything I have seen has an end – including the earth and stars. You are made in the image of God and therefore have a beginning because you were made. Being made implies a point of beginning. But you are in the image of God and will have no end. Your body is mortal and is subject to death. Your soul is not. You are immortal. Angels and demons are created just like you. They had a beginning as well. None of them are self-existing. They were created by God. When were they created? I do not know. In Job 38:4-7 God asks questions no one could know except God (or those present when He did them). These point to the fact that Job does not know because Job was not there. “Where were you when I laid the foundations of the earth? Tell Me, if you have understanding. Who determined its measurements? Surely you know! Or who stretched the line upon it? To what were its foundations fastened? Or who laid its cornerstone, When the morning stars sang together, And all the sons of God shouted for joy?” Who are the sons of God who shout for joy? As God describes this scene there appears to be many witnessing the creation of the earth as He is creating this material realm.

In the beginning God created the heavens and the earth (Genesis 1:1). Those few words speak of time. The word “beginning” is an expression of it. In Romans 5:6 are these words, For when we were still without strength, in due time Christ died for the ungodly. The words “in due time” mean that waiting had to be done by all including Christ. What if God, wanting to show His wrath and to make His power known, endured with much longsuffering the vessels of wrath prepared for destruction (Romans 9:22). Longsuffering implies something done over time. In 1 Corinthians 15:24 Paul writes the following, Then comes the end, when He delivers the kingdom to God the Father, when He puts an end to all rule and all authority and power. The word “end” also expresses time. Both Genesis and 1 Corinthians speak of actions done by God in order of time. If these things are done in time and God did them or has yet to do them in time, then God works in the framework of time. Does that nullify or contradict God being from everlasting (Psalm 90:2)? No. He works in time, but it has no effect on Him. He is the Ancient of Days (Daniel 7:9). That title denotes time and time can do nothing to Someone eternal. The word “eternal” would have no meaning if time did not exist.