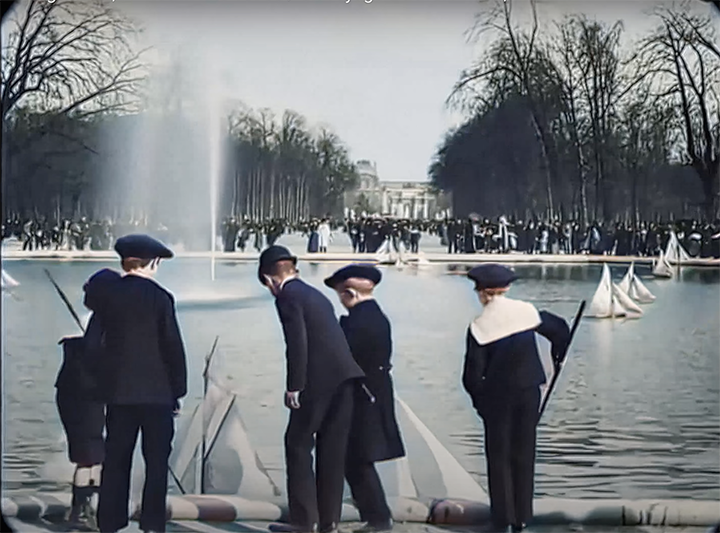 Recently I saw old film footage of Paris taken at the end of the nineteenth century. This would be some of the earliest motion pictures ever taken. It was still in the experimental stage. Someone placed a motion picture camera (new technology for the day) at various parts of Paris and recorded all the action running by. It was simply the happenings of life. It is interesting to see people of a different age simply doing routines they did every day. Everyone had plans for the day and they went to it.

The first thing that struck me was that they were all dressed as depicted in paintings of the day: men with beards and dark overcoats and the ladies in large dresses, parasols and feathery hats. People actually dressed like that. The painters were accurate. There was a scene with boys playing with little sailboats on a pond in a city park. I was amused that they all were identically dressed like Buster Brown.

Whoever chose the camera locations included famous landmarks of the city. There in scratchy black and white was the magnificence of Paris matched with its hectic flow of humanity. It is surprising to see the amount of traffic on the streets in Paris in the late 1800’s. There were teams of horses with large carriages filled with people. These shared the road with pedestrians, men pulling carts, and bicyclists. All were going about their day as they had the day before. As I was watching it occurred to me: none of these people, regardless of how young, could be alive today. The Buster Brown boys playing with boats on the pond would have been soldiers by World War I. The film itself is over 120 years old. Here they are with a few seconds of their lives recorded on a sunny afternoon and most unaware of the camera or even knowing what it was.

It is doubtful anyone alive could identify a single person in this film. These are more than images, these are people. They lived their lives whether all-too-briefly or suitably prolonged. Though they are seen on film for a few seconds of their lives they are far more than that. They have names and families. They enjoyed happiness and met problems like everyone else. They faced the undeniable human condition (love, tears, hope, envy, etc.). They made decisions that affected them and others with choices good and bad. They also would have come to the end of their lives. Eventually there is death. All that remains of them are a few frames of film, and perhaps a marked grave, but these are souls. Souls continue. All these things and time itself are part of the absolute commonality of mankind. It begins at conception, but it does not end. It is true they are not here anymore, but they are somewhere.

Time passed and continues to pass. These people can be seen on a sunny afternoon and they finished their day. That day was followed by another and soon a year slipped by. Decades pushed through to disappear in the distance. Time did not linger and cannot be paused. All we can do is take the occasion and appreciate it for what it is: a point of opportunity which will never return. Time and moments are meaningless without people. Time is pointless without the context of how it can be used. There can be nothing more monotonous or dreary than to think of time without someone in it. History is not about time per se. History is about everyone and what they did in time. It consists of the actions of those on earth and in heaven – the books of Matthew, Mark, Luke and John prove that point. It is the presence of someone that brings purpose and meaning to time.

We are here for a moment and have our sunny afternoons. The record of our lives is more than a few seconds. It is kept completely. We are going about just like those who went before us. In a century from now none of us is likely to be here. But we will continue somewhere and will join all who were before us. And our lives will be judged by how we used the time we have.

Ephesians 5:15-17 See then that you walk circumspectly, not as fools but as wise, redeeming the time, because the days are evil. Therefore do not be unwise, but understand what the will of the Lord is.