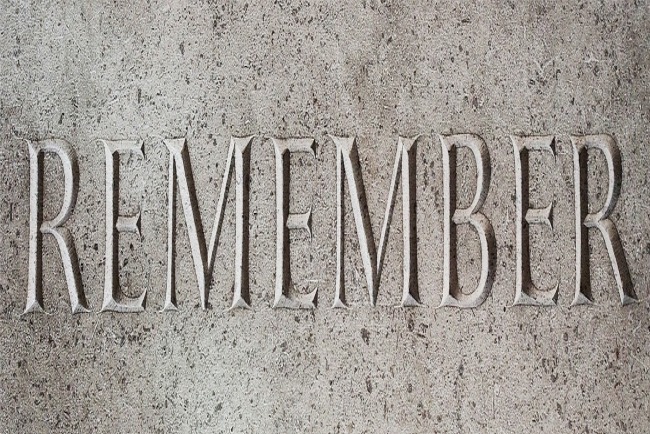 While recently walking through an old graveyard I noticed an inscription. On the base of a headstone were these words, “We Will Remember You Always.” I could not help but think those words were sincere. It was the heartfelt sentiment of wife, children, family and friends. Here was someone who played a significant part in their lives with strong emotional connections to them all. This person was loved and missed. Those who had this message engraved in stone had done so at a time of loss and they meant every word. They would remember their loved one. But the words came up empty when I realized those who loved this person so greatly were now lying somewhere under their own headstone. The people who knew this man to remember him were all dead by now. There could not be anyone still alive to carry the sentiment. The memory of this man would remain after he died but only while the people who loved him were still alive. They would outlive him on the earth but not by much. Given enough years even the youngest would be gone. Eventually the circle of people who knew and loved this man would slowly vanish. Words like, “always,” “forever,” and “eternally” have a hollow ring when applied to a place like this earth. Nothing here is eternal. Even the earth itself has a limited time and it too will no longer exist. Eventually most are completely forgotten on the earth. Ecclesiastes expresses this idea well.

Ecclesiastes 9:5-6 For the living know that they will die; But the dead know nothing, And they have no more reward, For the memory of them is forgotten. Also their love, their hatred, and their envy have now perished; Nevermore will they have a share In anything done under the sun.

All who live on the earth (or under the sun) have a chance of everything on the earth. Its fame, its glory, its rewards and its memory are for the living. Soon everything passes and one generation is replaced by the next which is also replaced in time. But there is a home where the word “forever” does not sound empty. It is a place where one will be remembered always.

In Luke chapter sixteen Jesus tells us of Lazarus and the rich man. One man is known by name; the other is nameless and is only remembered by what he was. In Matthew 7:23 Jesus states, “And then I will declare to them, ‘I never knew you; depart from Me, you who practice lawlessness!'” These are cast away never to be considered again. The very memory of them appears to be condemned and banished with them. But Christ has a different message for those who are saved. He states in Revelation 3:5 “He who overcomes shall be clothed in white garments, and I will not blot out his name from the Book of Life; but I will confess his name before My Father and before His angels.” God knows all who belong to Him. Their names are always remembered in a place where the word “always” lives up to its meaning. To be remembered by God is far better than being remembered and adored by all of mankind. Being known eternally in heaven is far better than the short time anyone is remembered on this earth. The words on the headstone mean little here on earth. The sentiment is strong but the reality is empty. In heaven the words carry a glorious meaning.