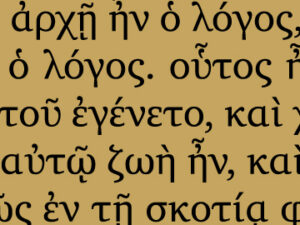 God uses words. There must be words. If there are complex ideas to be conveyed between people, then words are needed. The writer, the reader, the speaker and the listener must know the words and how they are used to understand the message. In the English language are thousands of words. These are required for the thousands of objects, ideas and actions which must be identified from each other and expressed for distinction. English is not unique. Thousands of words are necessary in any language. People can communicate through pantomime but that only goes so far since it usually becomes a guessing game. Sign language, while not spoken, is a language representing words with all the complexities and subtleties found anywhere else. Words are powerful and require no guess work. The message is sent and received instantly from one mind to the next. Words can be recorded and preserved beyond their ages. The cuneiform tablets of ancient Mesopotamia are discovered, read and understood today. These were preserved through the centuries and then read five thousand years later. Words are powerful. Written words are more so.

God knows how to communicate to man. There is nothing haphazard about His means. It is all well planned. God chose the written word. He chose the languages He would use. He chose the time in which to tell each part of the message. He also protected His words through the ages. There is no ancient document so well preserved with as many ancient copies surviving as the Bible. God could have used any variety of means to communicate to all mankind. He gave words which were written by prophets through the ages, starting at about 1300 B.C.

He could have chosen to send people feelings instead of words. This would be a confusing method since people get feelings all the time. How could you distinguish a feeling sent by God from every other feeling? A feeling could be encoded with some sense of right or wrong to it (feeling good, bad, warm, cold, satisfied or dissatisfied), but could never be more specific. One could feel like they were doing right but never know what they did to feel right. It could only be confusing. What if today you did one thing right and three things wrong. How are you supposed to feel? How do you interpret the feeling of one fourth right? Words would have to be used to explain the feelings. So, we are back to using words. God could have used a wide range of artistic expression with musical tones, colors or paintings and dance or a stunning sunset. While the message might be beautiful it would be vague. If the message is left ambiguous or up to subjective interpretation, then it cannot be that important. One guess would be as good as another, but they would all still be guesses. Knowing this first, that no prophecy of Scripture is of any private interpretation (2 Peter 1:20).

God chose words because the message is important enough to tell all mankind through the ages. The information is vital and is not up for guesswork, assumptions or imagination. He chose specific words and the Bible is inspired word for word. There is more yet. Jesus states the following in Matthew 5:18, For assuredly, I say to you, till heaven and earth pass away, one jot or one tittle will by no means pass from the law till all is fulfilled. The Bible is inspired letter for letter, stroke for stroke.